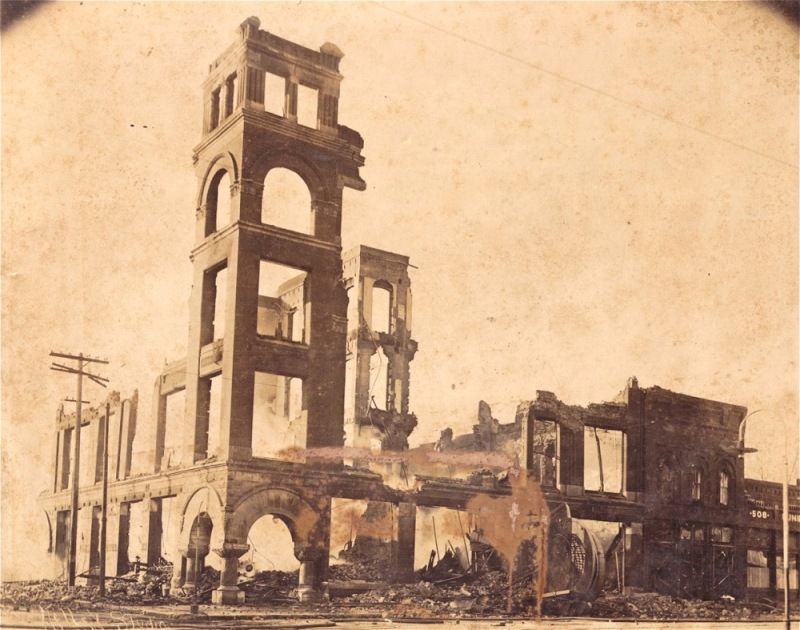 Halloween is right around the corner and what better way to get into the spirit by chasing some a few actual spirits….?

Our first stop takes place at the Katy Depot. Denison was established in 1872 by the Katy Railroad and they put all of their equipment on the east end of Main Street.

Over the years, hands, feet, toes…etc would get caught in between the rail cars and might need to be amputated. So, a graveyard was set up somewhere behind the Katy Depot and they would hold funerals for everyones appendages that were lost.

Some people report that they have weird feelings when they walk by the depot and there have been reports of dogs howling at night….

Next stop is 118 W. Main St. The 100 block is the oldest block on Main Street. We know that this building has a ghost but, we aren’t quite sure who it is.

At some point, a couple moved to town and were restoring the building and they had a crew that was working in the basement. The workers felt a presence and one of them turned around and snapped a picture and in that photo you can see what appears to be the outline of a figure.

Several years later, a young couple moved into the loft upstairs that had been restored. The wife never noticed anything but anytime she would leave, her husband had strange things happen to him in the loft. One time, his smoke alarm would not stop going off and they had 14ft ceilings. So, he got a ladder and turns it off but it continued to beep. Then he took the battery out and it went off again. The alarm finally stops but he could hear foot steps and their dog was going crazy like there was someone in there.

In the 1890’s Denison had what’s called “Denison’s Night of Terror”.  It was the night that a man killed 4 women all throughout town. One of them was a prostitute and in Denison’s early days, this particular building would have backed up to a brothel. And she was murdered in that alley.

Our next stop is 311 W. Main St home of 2 Chicks Home and Market. This building was built in the early 1870s and eventually it became a hardware store known as “Petersons Hardware”.

Then, Elsie bought the building and turned it into 2 Chicks Home and Market as it currently is today.

When they moved into the building, they started having some strange occurrences. Doors would open and close on their own and sometimes they would feel like somebody was there but they were never quite sure.

Elsie remembers “One day we came in and there was a porcelain hand on a shelf that was broken on the ground. So, we went back to look at the security film.” On the video, everything seemed fine until a fog started to roll in and then it suddenly stopped by the bookshelf with the figurine and then you see the figurine like it was slapped and it falls straight to the floor. “And we did double check and there was no air on, there was not a feature or a sequin, nothing moving at all” Elsie confirms. Watch the security camera footage below.

And it was after that they really started to experience some weird occurrences. They would be in the back room and would feel someones hand brush along their back. They do think their ghost is very playful and have named him Jack after a former owner of the building. Elsie will walk in and say “hey Jack lets not mess around today” and he’ll leave her alone. Elsie also has an ode to Jack in her building – stop by and have her show you!

We now move down to the 500 block of Main Street where there used to stand a community college.

The college eventually failed and it was turned into the original Hotel Denison. On New Years Eve in the early 1900’s, there was a really big fire that wiped out the entire building.  As the story goes, there were 500 guests staying that evening and they claimed everyone got out safely. But, we have some suspicions.

They decided to not rebuild it as a hotel.  Early on it was J.C. Penney and then became Walter Jenning’s Furniture. After Walter Jennings and his wife passed away, it became an antique mall. And today, it is still there and still an antique mall called Main Street Mall. One thing that people have noticed is that shoppers will occasionally see “figures”. One time, one of the shoppers was in and she was at the back of the store, and there was a lady kind of cleaning some items. And the shopper went over to the lady to ask what the price was on an item. The shopper turned her head for a split second and when she turned back, the lady who had been cleaning had disappeared. Another instance occurred where a couple saw a lady and asked for help with an item and the lady drifted through a wall.

Looking for more paranormal properties? Pick up a copy of “Ghosts of the Gate City” by Brian Hander at our local downtown retailers!